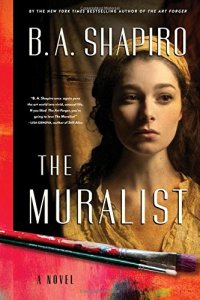 As a big fan of B.A. Shapiro’s first book, THE ART FORGER, I couldn’t wait to get ahold of THE MURALIST. But I must say it was NOT as good as I had hoped.

One thread of the novel concerns Danielle Abrams, a young woman who works at a prestigious auction house in NYC. She is also obsessed with the history of her great-aunt Alizée Benoit, an American painter who worked for the Works Progress Administration in the 1930s painting murals to decorate public buildings. In the course of her auction work, Abrams comes across several intriguing and unattributed paintings she believes may be related to her great-aunt.

The other thread to the story is Benoit (a fictional character) herself. She was one of a number of artists involved in the WPA work. Others you meet in the novel include Mark Rothko, Jackson Pollock and Lee Krasner. Between Abrams and Benoit, Benoit’s was the more interesting story.

In addition to hanging out with her fellow artists, Benoit’s tale involves her increasingly panicked efforts to get her Jewish relatives safely out of Nazi-occupied territory, in advance of World War II. As well as the impact her growing fears have on her psyche and her work.

Eleanor Roosevelt and Breckinridge Long (a former assistant Secretary of State infamous for limiting the number of people granted visas to the US) make appearances. As do several activist organizations working to get refugees out of Europe. There’s also a brief mention of two leading pacifists of the era – Joseph Kennedy Sr. And Charles Lindbergh.

More about B. A. Shapiro.

You may want to read my review of an earlier book by Shapiro, The Art Forger.