“Hitler was a powerful and spellbinding speaker who attracted a wide following of Germans desperate for change. He promised the disenchanted a better life and a new and glorious Germany. The Nazis appealed especially to the unemployed, young people, and members of the lower middle class (small store owners, office employees, craftsmen, and farmers).

The party’s rise to power was rapid. Before the economic depression struck, the Nazis were practically unknown, winning only 3 percent of the vote to the Reichstag (German parliament) in elections in 1924. In the 1932 elections, the Nazis won 33 percent of the votes, more than any other party. In January 1933 Hitler was appointed chancellor, the head of the German government, and many Germans believed that they had found a savior for their nation….

Hitler began a concerted policy of “synchronization,” forcing organizations, political parties, and state governments into line with Nazi goals and placing them under Nazi leadership. Culture, the economy, education, and law came under greater Nazi control…

He targeted the country’s Jewish minority, who represented, at the time, less than 1% of the German population of 67,000,000. In this way, Hitler succeeding in unifying the German people against a shared and identifiable enemy. International opinion condemned Hitler’s methods but did not intervene until Hitler started World War II. 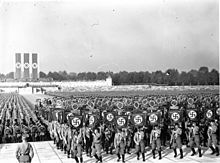 We all know how Hitler’s story turned out.

I don’t want to be an alarmist but I have to ask, what has happened to our famous U.S. constitutional system of checks and balances, which is supposed to protect us from ideologues. Is there no one in Washington willing to act against a President who: