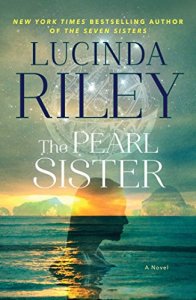 A thoroughly enjoyable read from cover to cover.

Continuing The Seven Sisters series, Lucinda Riley this time tells the story of CeCe D’Apliese, who launches a search for her origins on a plane bound for Thailand and eventually winds up in the Never Never lands of Australia. Parallel with CeCe’s story, is the story of Kitty McBride, an 18-year-old Scottish clergyman’s daughter who lived 100 years earlier but also wound up in Australia. The step-by-step revelations of how these two stories are connected make this book a real page-turner.

For CeCe, an artist currently unable to create, it’s a recent and hurtful break with her sister and soulmate, Star, that begins her search for her family of origin. For Kitty, it’s the sudden disillusionment with a beloved family member that sends her halfway across the world. Along the way readers explore the once lucrative natural pearl industry that once made fortunes for a handful of white families in Australia, a financial trading scandal in London, and some of the spiritual beliefs that live in Aboriginal cultures.

Both CeCe and Kitty eventually find contentment in their lives but not without lots of rocky experiences with love, tragedy, racism, and betrayal. Well worth the investment of time.

My review of Book #1 (The Seven Sisters) in the Series

Review of Book #2 (The Storm Sister) in the Series

Review of Book #3 (The Shadow Sister) in the Series

Or other books by this author: