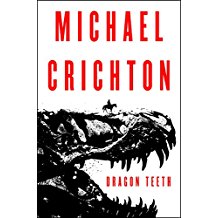 Awarded three stars on Goodreads. Published posthumously by the author’s family, DRAGON TEETH is billed as a 19th century rivalry between two pioneering paleontologists, both on the hunt for dinosaur bones in the western United States, at a time when few were brave enough to espouse the theory of evolution. NOTE: It’s based on the real life rivalry between Othniel Charles Marsh and Edward Drinker Cope during the Bone Wars (aka Great Dinosaur Rush). This is how the novel begins. But it’s just the set up. Most of the book is more of a story of the Old Wild West. 20 year old William Johnson is a wealthy, spoiled Philadelphia shipping magnate’s son, attending Yale University, when bravado forces him to accept a stupid bet from a rival student. To win a thousand dollars, Johnson embarks on a summer field trip with a paleontologist and his crew and finds himself thrust into the middle of a fierce academic rivalry. Very quickly, though, the story focuses on Johnson alone, as he navigates the inhospitable Badlands, facing off against murderous indigenous tribes, local outlaws, and lawless small towns rife with gamblers, prostitutes, and rat-infested hotels. Big Surprise, huh? Wyatt Earp and his brother even make an appearance. I won’t say more for risk of spoiling the story. It’s a quick read, kinda fun, but not one of Crichton’s most imaginative efforts. What I found interesting was getting immersed into life in the Western states, circa 1870s, and thinking about how quickly and completely the government came to dominate the area, not necessarily for the better. More about Michael Crichton (1942-2008). Here’s a link to the author’s Website, Wikipedia page and his obituary