Full of Depth, Complexity, and Surprises. Rated 4 stars on Goodreads. 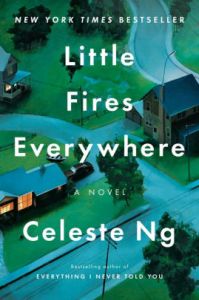 So many authors, even those able to concoct a great plot, tend to simplify so many of their characters — making some bad and others good. Not Celeste Ng.
Yes, this has a riveting and complex plot. And yes, the characters are fully three-dimensional. But what Ng is most skilled at is making it a challenge for the reader to figure out what the right answer is when dealing with complex issues and people.
LITTLE FIRES EVERYWHERE (a title with both a literal and figurative meaning) closely examines two families, their internal relationships, and relationships with one another. In their highly planned and, in the opinion of many, perfectly designed town of Shaker Heights, Ohio a controversial custody battle is developing–between a struggling, single Chinese immigrant, who is fighting a powerful system to regain custody of her young daughter, and two white parents who have had custody of the baby for most of the child’s life.
Obviously, issues of class, money, power, and social custom are raised. But that is all to be expected. What makes Ng’s novel so rich is the assorted back stories that, when revealed, make the people on opposite sides of the custody battle equally sympathetic. Even when a resolution comes, I still didn’t know if it was the right decision.
In a world where so many of us know American families who have adopted Chinese babies or other children from a different racial background, here’s a book that does justice to the complex issues involved in each case.
You might be interested in my review of another Celeste Ng Book, Everything I Never Told You.