If Only This Book Were Required Within Every School System Curriculum. Awarded 5 stars on Goodreads. 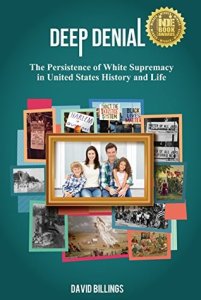 I did not award five stars because this is an easy book to read. It’s not. And not because it is full of exceptionally well-written prose. I am giving it five stars primarily because of the power and importance of its message and the way in which it forced me to reevaluate white privilege and its flip side, racism, in America.

The author, David Billings, is a minister and experienced community organizer, who has fought racism for decades. By combining his own personal stories of growing up white in the South with our country’s history, he has created a readable narrative that illustrates all the systematic ways white Americans have used their power to maintain distance from Native Americans, Black Americans, Chinese immigrants, Japanese immigrants and Latinos. For me, Billings’s greatest gift is the ability to keep a “big picture” framework front and center, which puts the story of this country’s racism in an unique perspective. That’s important because too often, as Billings points out, it’s simply too easy to get sidelined when talking about race. Since it’s a difficult and uncomfortable topic for ALL people.

What this book did for me is convince me that Billings is, unfortunately, accurate in the sobering truths he tells. Racism is as core a part of the American story as concepts like freedom and democracy. And it always has been. And I can now see many of the ways that our government institutions, laws, and social organizations have consistently worked together, in overt, subtle and insidious ways, to perpetuate a divided society where black Americans (and others) are continually disadvantaged. And for someone who one day hopes to see a less racist world, reading this book has been an important step toward my understanding of what’s wrong.