A beautiful and rich novel with depth, complexity, mysticism, and insight into the human condition. Awarded five stars on Goodreads. 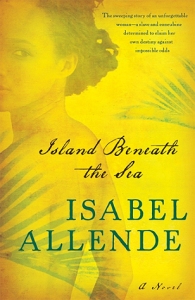 The entire time I was reading this book, I felt that the heat of the tropical setting (which felt like its own character) forced the other characters to live more closely to many of the more primitive elements of human beings — like lust, greed, violence and the search for pleasure.

Fundamentally, the book is a story of the slave rebellion of the 1700s that made Haiti an independent state and what happened to the white colonists who were forced to flee to save their lives. Through the stories of a white plantation owner (who relocates to New Orleans), his legal family, his black concubine, and assorted children of all races — Isabel Allende exposes the complexity and brutality of slavery in all the ways it was accepted as part of everyday life. Where the shade of one’s skin determined a person’s place in society. And also where societal hypocrisy is deeply rooted with both whites and blacks, living by rules that dictate the many horrors that are allowed, as long as they aren’t mentioned in polite society.

The book has a similar feel to Allende’s HOUSE OF THE SPIRITS where one isn’t quite sure where the lines are between reality and belief. Voodoo and historical island beliefs and traditions are intertwined with Western culture. And the characters are so well developed and multi-dimensional that they become flesh and blood. A masterful telling of a dark chapter of history, illuminated only by the fledgling abolitionist movement.

You may also be interested in my reviews of other books by Allende:

A Long Petal of the Sea

In the Midst of Winter