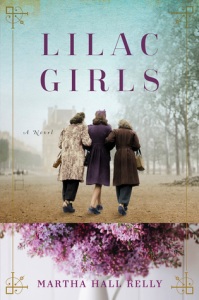 Like many, I was aware that the Nazis used prisoners in concentration camps for medical experimentation. But before I read this book, I don’t think I quite understood what that was like for those experimented on. And the book is based on true stories.In LILAC girls, Martha Kelly brings this story to life using three parallel narratives:
Kasia – a Polish concentration camp survivor who is operated upon.
Caroline – a privileged America who works on behalf of orphans, refugees, and survivors
Herta – the only woman doctor to perform the experiments at the all-women’s concentration camp, Ravensbruck.

It’s these three women who make the story so personal, even helping to answer the question – “How could any trained physician convince herself that participating in this type of medical experimentation was acceptable.”

Moving back and forth between their stories, Kelly creates a suspenseful portrait for the World War II years. But I admit I was surprised when the war ends only about half way through the book.

The remainder moves into the 15 years following the war and what happens to the three women. This shift felt a bit abrupt to me — and slowed the pace of the book considerably for a time . But I’m glad I stayed with it. Because the pace picks up again and I ended the book more satisfied, after learning about the ways in which humans can indeed recover from the most unimaginable atrocities.