Skip to content
Saga of another powerless female in England during the Middle Ages. Awarded 3 stars on Goodreads. 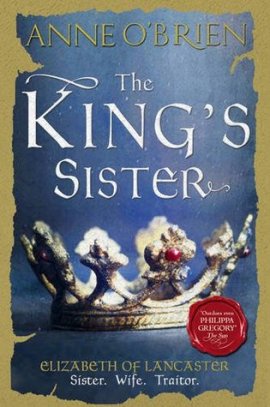 Although I read a lot of historical fiction, I did not know anything about the subject of this novel, Elizabeth of Lancaster, the younger daughter of John of Gaunt and sister to King Henry IV. She sits directly in the middle of King Richard II’s overthrow and Henry IV’s subsequent ascension to the throne. All of which launches the Wars of the Roses.
As a royal granddaughter of King Edward III (her father being a third son) Elizabeth is naturally used as a pawn to build alliances. At 17 she is forced to marry a wealthy eight-year-old boy to expand her father’s influence. While waiting for her husband to grow up, she falls for her first cousin’s (Richard II) half brother, John Holland, who becomes Elizabeth’s second husband. And that sets up the conflict.
When Richard II begins to show poor leadership and plots to dethrone him are launched — Elizabeth’s husband, John Holland, supports his own half-brother, Richard II, while Elizabeth supports HER brother, the future Henry IV. A sticky place to be in a marriage.
Their story of family conflict and rivalry is a good one, though I did not think the book was that well written. It struck me as overly melodramatic – which wasn’t necessary since the story itself holds enough drama. There were long passages of Elizabeth describing her own angst, which became repetitive and tedious. (Yes, we get that she felt conflicted!) Also, those descriptions don’t carry enough believable emotion. It feels more like a third person account of angst rather than a first person account.
To me, this novel is a good way of learning about another important woman lost in history, but overly long and wordy.More about Anne O’Brien.

You may also be interested in my review of other historical novels by O’Brien: