If you are a fan of the movie, OUT OF AFRICA, with Meryl Streep and Robert Redford you may, like me, be disappointed when you read the book. Because it doesn’t have that same, clear linear narrative of Karen Blixen’s (Isak Dinesen) life in Africa. Plus, the movie clearly adds biographical events to provide a movie structure. Awarded three stars on Goodreads. 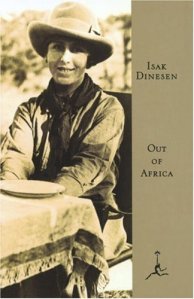 Instead, the book is more a series of snapshots. Individual stories and recollections of both local and European people, each one separate and distinct, rather than woven together into one story.

There are of course stories about friends like Denys Finch-Hatton and Berkeley Cole, a British ex-pat. But they are episodic. For example, Blixen’s troubled marriage to Bror Blixen and romance with Finch-Hatton are never mentioned in the book.

Blixen’s use of language is exceptionally beautiful, though I must admit I wish I could have heard Meryl Streep narrate it for me. What you do get collectively from this read is an account of life in Kenya during and after World War I, including deep understanding of the beauty inherent in the lives of the local tribespeople. Blixen clearly had a rich appreciation of how the Kenyans made sense of all that colonization brought to their country.