One of the most engrossing books I’ve ever read. And one of the most difficult to complete. Beautifully written, thoughtful and perceptive, and a remarkably rich expose. Awarded five stars on Goodreads. This one won the Man Booker Prize in 2014. 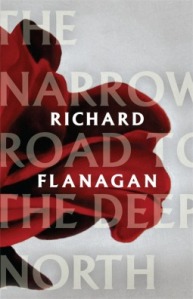 Through stories related to World War II, Author Richard Flanagan looks at the ironic interplay between human nature and war — how every human being touched by war is changed and often damaged forever, how difficult it can be to categorize war-related actions as either good or evil, how war impacts personal behaviors long after combat ends — but also how intensely alive those who experience war feel while it is happening.

The main character is an Australian physician who spends much of World War II in a Japanese prison camp, trying to keep fellow POWs alive as they face rampant diseases and filth, inadequate food and medicine, and forced labor and brutal treatment from the Japanese. One moment the doctor finds himself desperately trying to save a single soldier’s partially amputated limb, and the next, is required to select which hundred sick prisoners will be forced on a death march they are unlikely to survive. The graphic descriptions of surgeries performed, Japanese atrocities committed, and ongoing lack of even basic hygiene are not for the faint-hearted.

The reader also witnesses how the very Japanese who inflict this torture DURING the war, are then on the receiving end AFTER the war, in the deprivations they face, in their efforts to find meaning in what they did, and in the pitiable attempts of the so-called conquerers to impose justice for what they selectively judge to be “war crimes.”

And then there are the ways in which the experiences of war continue to play out decades after the war ends.

• How some struggle and fail to find a similar intensity of feeling in the lives they build after the war.
• How others who held tightly to some ideal to keep them alive during combat react when that meaning suddenly vanishes.

• Even how and why war memories change and sometimes even disappear over time.

I would call this a must read book for anyone who is interested in truly understanding the nature of war, in ALL its complexities.