I have read this American classic (and winner of the 1961 Pulitzer Prize) before (awarded it five stars on Goodreads) and seen the 1962 movie with Gregory Peck many, many times  (still a masterpiece after more than 55 years)!

But this time I decided to invest the 12 hours it took to listen to the audiobook – because I wanted to get a better appreciation of Harper Lee‘s storytelling voice. Please stay with me – because what I’m about to write may seem contradictory at first glance. 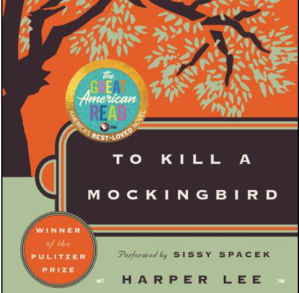 First, my decision was a good one! There is something about listening to the words, rather than reading them, that helped me pay closer attention to how this author put sentences together with such carefully chosen words. And for the first time, I understood one of the things the novel is known for — that is, how Harper Lee succeeds so perfectly in balancing Scout’s voice, as both a child living the events and as an adult looking back on them.

If you are unfamiliar with the book, let me VERY briefly introduce you to some of the central characters:

At the beginning of the novel, “Scout” (aka Jean Louise) Finch is the six-year-old daughter of a respected attorney, a widower Scout calls by his first name, Atticus. She is a quintessential tomboy, just about to start school, though she doesn’t understand the need to go. Scout’s older brother, Jem, is about 10 years old. And the two siblings spend each summer with a neighbor’s relative, Dil — who is about Scout’s age and modeled on Harper Lee’s childhood friend, author Truman Capote. Together, over a period of three years, these three spend their time testing limits and trying to make sense of all that goes on in their small Southern town.

It’s truly a brilliant book, one of a kind, full of humor, and reflects a significant chapter in this country’s history. Everyone should read it, and more than once. It so beautifully captures life in a small town in the middle of the 1930s Depression, with all the associated desperation. A time and place where some folks are clinging to out-dated traditions and ideas while others are eagerly embracing a more just and egalitarian future.

Sitting between these two worlds is a trial that rocks the town — in which a black man is charged with raping a white woman. Atticus nobly defends the man, Tom Robinson. By showing all these events through the eyes of Scout (ages 6-9), Lee shines a dazzling light on American racism and both the overt and subtle ways it played out in daily life, through class conflict, and ultimately, in the judicial system. Somehow this young girl’s desire to understand her world makes the drama even more riveting and poignant.

There’s no way you can read this book and not love Scout, and want to protect her from all that’s ugly in the world. Her earnestness, honesty, and determination so perfectly mirror the same characteristics we see in her exceptional father, who has the most admirable way of lovingly raising his motherless children.

Now for the conflict I warned you about. Although I AM recommending that you listen to an audio version of this novel, I am NOT recommending the version I listened to, narrated by Actress Sissy Spacek. While she’s got the Southern accent down pat, I did not find her nearly as skilled a narrator as she is a screen actress. Narrating any audiobook requires different and specialized skills, notably the ability to clearly differentiate characters using inflection alone and the ability to express all manner of emotion, exclusively through one’s voice. Spacek does not have either skill and at times, her delivery is downright flat.

I’m afraid I have not found another version to offer as a substitute, though I see a few free versions available on Youtube.com. So, bottom line: try to find a different audio version. If not, then listen to the Spacek version.

You might be interested in my review of Harper Lee’s only other novel, Go Set A Watchman. It’s a story of Scout as an adult.