It’s so wonderful when you find a book that is well-written, full of surprises, and speaks directly to your own personal interests! That’s what this book was for me. Awarded five stars on Goodreads! 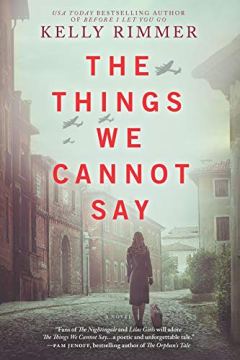 Author Kelly Rimmer has oh-so-skillfully crafted an intensely suspenseful story that melds together the drama of 1940s Nazi-occupied Poland and the deep emotional connections that can exist among members of one family (even when they are not in contact) — along with the best elements of a page-turning mystery. It’s simply a joy to read.

The two central characters are two formidable women from two different time periods — Alina Dziak and Alice Michaels.
• In 1939, Alina is a teenager, deeply in love with her sole mate, when Nazis invade her beloved Poland. Despite her parents’ efforts to protect her, Alina slowly comes to experience the growing menace of the Nazis and the ways in which their presence is forever changing the lives of both Jews and non-Jews. Alina comes of age, exploring what she is capable of, as a direct result of repeated tests to her love, courage and stamina. Hers is a story of great romance and sacrifice.
• Alice is a contemporary, stay-at-home Mom living in Florida, feeling distant from her hard-working husband, intimidated by the formidable brain in her 10 year old daughter, and consumed by the demands and responsibilities of raising a seven-year-old son diagnosed with autism spectrum disorder. And, as the book begins, Alice is thrown the added complication of a beloved grandmother in declining health, who is suddenly making strange demands that threaten Alice’s well-ordered life.

The story unfolds so beautifully that I won’t say more, for fear of spoiling the pleasure of this read. But this book explores some of our most universal human themes. As Alina faces death, her need to find answers to lingering questions from her past becomes urgent. Alice wrestles with divided family loyalties — weighing her dedication to her roles as wife and mother against a strong desire to give her dying grandmother a peaceful death. And, in times of war, when people so often must face extreme deprivation and unspeakable loss, how much can they be expected to endure?

This is a deeply emotional, and at times, difficult read. I predict you will cry multiple times. But I found the main sentiments that lingered at the end were respect for the great resiliency innate to human beings and a comforting belief in the power of love.

You can bet I will now read more books by Kelly Rimmer.