This is a difficult book to describe. It a coming-of-age story that combines mystery and mysticism. And it challenges what we THINK we know about science and reality. Exceptionally well-written, thoroughly unpredictable, and full of strange and intriguing characters. Definitely a one-of-a-kind read. Awarded four stars on Goodreads. 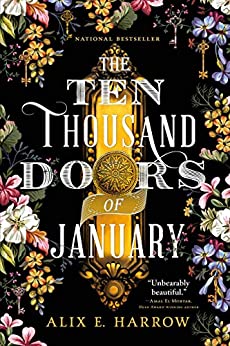 January grows up as a motherless, lonely child, under the care of a strict governess and a wealthy benefactor. Her only friend is a young boy who works on the estate. Her benefactor, Mr. Locke is also the man who employs January’s father, sending him on long trips all over the world to collect unusual artifacts. But as January grows up, she begins to discover doors with unusual properties – they allow people to pass from one world to another. Even from one time period to another.

Then, a chance remark January makes at a party (for members of Mr. Locke’s archaeological society) launches a chain of events that sends January on an adventurous journey — where she learns about friendship and loyalty, learns to trust her own intuition and intelligence, experiences racism and poverty, and uncovers secrets that threaten her very existence. I won’t say more for fear of spoiling your own discovery of this unusual and surprising novel.

More about the author, Alix E. Harrow, a self-described author of speculative fiction, a genre with which I was previously unfamiliar. This is her debut novel. Her background is quite interesting and you’ll see that she draws on nearly all of it in this book. Enjoy!

You may be interested in my reviews of other books by Alix E. Harrow:

The Once and Future Witches