TIDELANDS is the first in a series of historical novels (The Fairmile Series) from the prolific Philippa Gregory, perhaps best known for her historical fiction about royal figures (i.e. THE OTHER BOLEYN GIRL and THE WHITE QUEEN among many others). This series will trace one family’s story across 250 years of history, primarily focused on the role of women, who so often get short shrift in historical works. (Volume two, DARK TIDES, is scheduled for publication in November 2020.). This completely absorbing book is a very promising start! 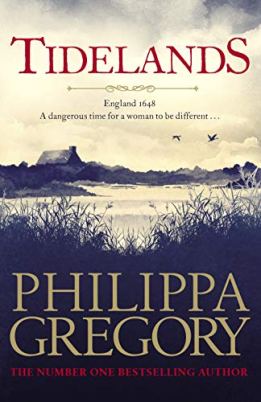 Set in the mid-1600s in a small seaside village in England, it’s the story of Alinor, a woman raising two children alone after her husband abandons them. Alinor is a struggling herbalist and midwife who serves her neighbors faithfully though barely managing to feed her family. Locally, everyone is gossiping about the dispute between Parliament, King Charles I, and the army of Roundheads — wondering whether the King will actually face charges for threatening the people of his own realm. This is, of course, the beginning of the English Civil War. But that story serves only as a backdrop to the real story of life in a small village.

A chance encounter with a priest at the start of the story changes Alinor’s life, providing new possibilities for both her and her children. Her gifted son Rob may be able to advance his studies with the priest while her ambitious daughter Alys determines to marry the heir to a prosperous local farm.

Even if my description sounds a bit mundane, I found the story mostly riveting, with a couple of dramatic twists near the end that were unexpected, and a cliffhanger ending. Plus, I learned more about the daily lives of women during this period, the small-minded suspicions imposed on a single mother (especially one with beauty), and the ways that fortune and chance can impact lives for both good and ill. I simply can’t wait for the next installment.

More about the author.

You may be interested in my reviews of the other books in the Fairmile series:

Or, reviews of some other books by Philippa Gregory:

The Taming of the Queen