Author Lucinda Riley has become one of my favorites. I am completely captivated by her The Seven Sisters series. Awarded five stars on Goodreads. 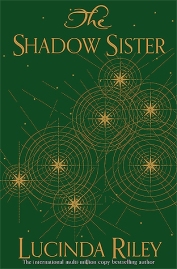 This is the third in the series that I’ve read and I tore through it in about five days. Star is one of the six adopted daughters of the recently deceased Pa Salt – a wealthy and mysterious man who raised his girls in a mansion on the shores of Lake Geneva in Switzerland. Shortly before his death, Pa Salt gave each daughter a clue to her origins, leaving it up to each to decide whether to pursue her history. Each daughter’s exploration is the reason for the series. (This is the premise that underlies the entire series)

Star has always been the quiet one, tightly connected to her sister Cece who has been Star’s mouthpiece all her life. Now 27 years old, Star begins a search for her origins and finds it also involves examining her relationship with Cece. That journey is one thread running throughout this book.

A second thread concerns Flora MacNichol – an outsider in British society during the reign of King Edward VII. She too is slowly learning about her origins — a secret nearly everyone knows except Flora. What’s more — Flora’s story turns out to be connected to Star’s.

Along the way, Riley creates some quirky characters. Including the King’s mistress, Alice Keppel, who becomes Flora’s mentor. One aspect of this author I have come to admire is how skilled she is at staying true to who each character is and how each would react.

It’s a page turner, a look back at rich Edwardian society, and a story of taking risks in order to experience love. Occasionally you might encounter a bit of trite writing, but, for me, it didn’t detract from the read.

You may be interested in my reviews of other books in this series:

Or books by Riley that are NOT part of this series:

More about the author, Lucinda Riley.